Artificial and natural no and low calorie sweeteners can be found in a wide variety of foods. But are they safe?

The U.S. Food and Drug Administration (FDA) has approved a variety of sugar substitutes or artificial sweeteners. Similar agencies have also approved these sweeteners for use in other countries. However, this does not mean there are no potential health effects.

Aspartame and Acesulfame Potassium
Aspartame is sold under the brand Equal. Many products containing aspartame, including Equal packets, also contain acesulfame potassium (Ace-K).  For this reason, we will examine them together...

The FDA approved the use of aspartame and Ace-K in food in the 1980s. They are considered safe for the general population; however, people with phenylketonuria (PKU) cannot digest aspartame. PKU is a rare condition and is usually found during a newborn screening. One study indicates that long-term use of aspartame caused blood cancer in rats. FDA studies, however, did not have the same results.
Aspartame is found in a variety of foods and beverages, especially diet sodas, powdered diet drink mixes, and light yogurts.


Saccharin
Saccharin has been sold under the name Sweet’N Low since 1957.
During the 1970s and 1980s, saccharin was considered a potential health risk because it caused bladder cancer in rats. However, the FDA considers saccharin safe because no studies have found increased cancer rates in humans.
If you are concerned about saccharin’s potential health effects, avoid TaB soda, Sweet’N Low powdered sweetener, Sweet’N Low syrup, Sweet’N Low candies, and Sweet'N Low baking mixes. Few food products contain saccharin; however, this list may not be complete.

Sucralose
Sucralose is better known as Splenda.
The FDA approved sucralose for consumption in 1998. A few studies found that sucralose may cause cramps or stomach problems.
If you are worried, avoid Splenda brandproducts. Sucralose is also found in Minute Maid Light juices, Crystal Light Liquid, some Yoplait yogurts and Fiber One 80 calorie cereals.

Stevia
Stevia leaves contain Rebiana (also known as rebaudioside A or Reb A). Stevia is sold in powder by Truvia, Pure Via, Stevia In The Raw, and Domino Sugar and Stevia blend. Stevia is available in liquid form as SweetLeaf SweetDrops. Stevia leaves can also be purchased whole.
In 2008, the FDA approved stevia for use in foods. Previously, the FDA had denied stevia’s safety because it caused infertility in rats.
Stevia is found in many products including Zevia soda, Tropicana Trop50 juice line, and Crystal Light Pure.

Sugar Alcohols
Unlike many other sugar substitutes, sugar alcohols are not often used in home cooking.
Each sugar alcohol is approved separately by the FDA. Because sugar alcohols cannot be digested, they may cause bloating, gas, and diarrhea.
Sugar alcohols are commonly found in sugar free candies and gum. They may appear in the ingredients as erythritol, mannitol, sorbitol, or xylitol.

Acceptable Daily Intake for 130 lb Person
These are safe daily consumption levels set by FDA for a 130 pound person. The larger you are, the more the FDA says is safe.

For comparison, the daily recommended limit for added sugar (not natural sugars) is 32 g or 8 teaspoons

Reminder
If you choose any of these sweeteners, remember most “no-calorie” sweeteners actually do contain calories. They usually contain 3 or 4 calories per serving, which is rounded down to 0 calories on the label. In large doses, such as in baking, these servings quickly add up.


Question for my readers: What sweeteners do you cook with? Are there any you avoid in pre-made foods?


Note: In 2013, I wrote this post for a hospital website. To my knowledge, it has never been published by them. If you do find it elsewhere, please let me know.
aspartame monk fruit nutrition saccharin stevia sucralose sugar alcohols

Popular posts from this blog

FAQs about Intuitive and Mindful Eating

On blogs and social media, you run into a lot of different acronyms. I get a lot of questions about the letters after people's names, such as RDN, CNS, CNSC,  and CDE.
You might be wondering, "What do these mean? Which professional is the right one for me? Can I trust them?" I'll help you sort through these questions...
But first, you want to know the difference between a nutritionist and a dietitian, visit my previous post on that topic.
What do these acronyms mean? 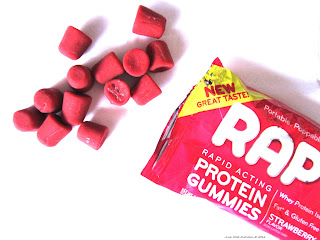 A reader asked me to compare the nutrition of junk food options out there and advise readers on best to eat. So, today we’ll look at gummy candies...

Gum Drops
Take gum drops, for example. They're corn syrup, sugar, corn starch and/or modified food starch, coloring, and flavoring. 4 large gumdrops are 150 calories, all of which come from the 37 grams of carbs. There's no protein, fat, vitamins, or minerals.