I was excited when I got my hands on Sam Turnbull’s new cookbook, Fuss-Free Vegan: 101 Everyday Comfort Food Favorites, Veganized. Sam is the blogger behind It Doesn't Taste Like Chicken.

Introduction
Sam starts with an introduction, as any good cookbook author should. What makes her introduction unique is how personable she is in it. 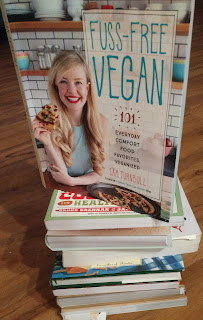 I just pulled another vegetarian cookbook off my shelf for comparison. It dives right into the fact that studies show diets containing fruits, vegetables, and whole grains are nutritious. Boring. There is no mention of who the author is.

Sam, on the other hand, is completely honest about who she is. She’s not a dietitian and doesn’t have a bachelor’s in culinary arts. But her introduction still makes me relate to her and trust her.

Like many vegans, Sam used to eat animal products and thought it might be hard to go vegan. Sam says, “I soon discovered that any meal could be made vegan, and with a few clever tweaks, a large spice cabinet, and a dash of creativity, I was loving my recipes. In fact, I loved them more than the original animal product based recipes” (page 2).

Her cookbook sets out to offer the same thing as her blog: easy, vegan meals without fancy ingredients or mock meats.

Sam starts out with a chapter on “My Vegan Kitchen.” Some of her tips you may have heard before. We all know to rinse beans well before using, right? But, Sam also shares advice I haven’t seen a thousand times before, like use tapioca starch to make your own vegan cheese and how to make your own tapioca starch. I didn’t know you could! (And, this is what I went to school for; isn’t it?)

More importantly, some of her recipes actually work. 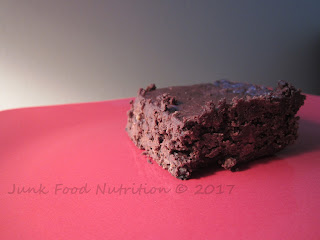 How many of you have tried a recipe from a published magazine or cookbook and been frustrated with the results? I have! If it’s published in a cookbook or magazine, it should be well-tested. But, again and again, I throw food out because it didn’t turn out as described or even edible.

But, I tried several of Sam’s recipes and only had problems with one.


As soon as I received her book, I started flipping through looking for a supper idea. That night, I tried her tofu bolognese. (I thought I took photos of it, but now I can't find them!)  Then, I dove into Sam's baked goods, by making her fudgy brownies and her banana bread.

The brownies so delicious I devoured them all by myself. I thought about sharing them—really—but I decided I wanted them all to myself. (What can I say? I like dessert a lot.) 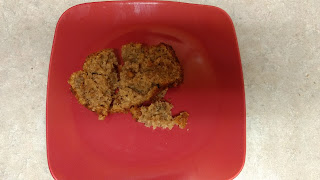 That said, the banana bread did not turn out as I expected (pictured right). It's crumbly. It's missing a binding agent. Normally, that binding agent is eggs. In vegan baking, it might be chia seeds, flax seeds, aquafaba, or psyllium husks. Additionally, there is a unit of measurement missing in the recipe. It says "1/2 light oil." I used 1/2 cup and Sam later confirmed that was the intended amount.

I’m also not thrilled with all of the recipes. Do I really need a recipe for vegan grilled cheese? Other recipes were too familiar to me. I’ve made vegan pho, noodles in peanut sauce, and banana bread, and cheddar scones before. Not to mention, I’ve made a lot of vegan cookies, brownies, and cakes before. In fact, now that I think about it, her vegan chocolate cake recipe looks a lot like the one I ate last month for my birthday (and no credit was given if she adapted it from elsewhere).

Ingredients
For the most part, Sam's promise to avoid "faux" things holds true. She does make a faux egg with chia or flax seeds  in her Gingerbread Animals and she uses nutritional yeast for a faux cheese flavor. Otherwise, Sam uses real ingredients that non-vegans are using too. You don't have to go out and buy faux beef crumbles for the bolognese sauce or fake crab meat for a crab cake

Photos
A great feature of this cookbook is that almost every recipe has a photo. All the main recipes do, but a few of the “staples” don’t. That’s okay; a photo of vegan heavy cream or vegan gravy might be boring anyway. I hope we know what they look like without a photo of the end result.

Cost
I can gush all I want about how awesome I think Sam’s book is. But, if it was $100, no one would buy it no matter what I said.

Some of you might be thinking, “Well, I can just get recipes free from her blog.”

You can. I like having a recipe on paper in my hands. When I try to cook from my phone or laptop, I find the screen times out or I spill ingredients on it or I accidentally knock it into my sink. Not good.

A $16 cookbook can be replaced for less money than a new phone or laptop and you won’t have to worrying if you just lost everything that was on your device.

Not to mention, books are nice to have around in case the electricity goes out (meaning you lose internet). (Side note: If that happens, there are a few no cook recipes, like the Heart of Palm roll.)

Conclusion
Overall, I like Fuss-Free Vegan: 101 Everyday Comfort Food Favorites, Veganized.
My biggest problem is that some of the recipes feel similar, too similar, to ones I’ve seen before. Depending on your culinary experience, this may or may not be worth the cost.

I have a bookshelf full of cookbooks. But, honestly, I almost never open them up and make a recipe from them. So, the true test will be to see if I open Sam’s cookbook up again. Feel free to follow-up with me about it.

Sneak Peak
Want to see a recipe before you purchase the book? I have permission to share one with you next week!

Disclaimer: I received a free copy of the book to review. I was not paid for the review nor was I told what to say. The opinions expressed here are my own...